Its been a while since I have posted here, mainly because not much has really happened….not much exciting or soul-destroying anyway. Which is a good thing.
Elson and I are happily walking the marriage path, once again, no major ups or downs there.
Which is a good thing.
We have moved to a new house out in the village of Bvumbwe. It is a guest house attached to a lovely cottage surrounded by a beautiful garden, wildlife and virtual silence.
That is a great thing.
Living in the mouldy flat in the middle of Limbe nearly sucked the life out of me. Here in Bvumbwe I feel like my soul has been restored to its former glory and I can get through the day without collapsing in a homesick heap.
Elson trots off to his home village of Nam’goma, near Monkey Bay, every couple of weeks. We have set up a small clothing shop there, so he keeps an eye on it and on his family.
We have adopted one of his dogs from the village – Timve – he keeps me company when Elson’s away. He has claimed the living room couch as his throne and he holds court there daily. Daily, as in 24/7. I have to forcibly remove His Majesty from the couch when I leave for work.
Funny thing – I feed him nsima and canned dog food (sometimes cat food – he loves fish). The chickens have taken to eating his leftovers. Hmmm…chickens eating meat. There is one chook called Ginger. She has eaten so much meat, that when there is none, she acts like a drug addict looking for a fix. She has taken (and obviously encouraged the other chooks) to peck at and eat the polystyrene foam under my new washing machine. It has become a craze! Its disturbing to watch.
Speaking of washing machines, I bought a new twin tub. I grew up my whole life with a twin tub in the laundry and its rubbed off on me. Its a beauty. No more hand washing my smalls for Elson. What a guy. Seriously- what a guy.
I ask him to do something and he does it. I needed a chest of drawers, so he goes into the village and speaks to the local carpenter. I need a wooden box made and fitted for my motorbike, he finds a guy to make it and gets a bar welded on the back. Then he finds a guy to make a lockable lid for it. Then he paints the whole thing and fits it to my bike. This guy is on a roll. My bench top oven blows a gasket – he gets it fixed the next day in the village AND he cleans off one year’s baked on grease and grime before it leaves the house. This guy rocks! Then I get home and the house is sparkling and dinner is cooked. If anyone wonders why I’m staying in this god forsaken country, its because of Elson.
Anyhoo…. life goes on.

So, here I am back in Blantyre, Malawi. Elson and I have greatly benefited from being apart for 6 weeks – we have never truly appreciated each other as we do now. It is so wonderful to know in your heart that you are loved, and loved wholly. And to know that I truly love my husband. It is a real gift.
I came home to a green Malawi. The rains have been good here in Blantyre and the crops and the vegetation (what is left of it) is greening up. It gives the place a good vibe and makes you feel like there is life all around – as opposed to the end of the dry season when everything has been cut down and used for firewood or building, and the landscape is brown and barren. It’s quite depressing.
The weather isn’t as hot as I remember in Monkey Bay – thank God, I say. In Blantyre we are up on a plateau so the conditions aren’t as humid or oppressive. There was a gorgeous wind blowing yesterday, so walking through Limbe wasn’t as hardcore as it was in Oct/Nov.
The flat I live in is pretty basic. The walls around the bathroom are rotting with mould and look disgusting. There is some white foamy shit growing around the skirting boards. That wasn’t there when I left in November…. The ceiling in the bathroom is hanging lower than before. I guess the main problem is that there is no way for the steam and water to escape from the bathroom, and there are no windows in the apartment that open outside – only into the corridor of the building complex. That sucks as I have no direct sunlight into the rooms. At times I feel like I’m imprisoned in a cell block. If you open the windows you invite all the noise in the block and if you keep them closed, you are walled in. You just cant win.
I have always been sensitive to noise. I guess being a musician, you come to appreciate sound in a refined manner. As a kid, I would have no choice but to listen to mum’s selection of music, which thankfully was exquisite. I got my deep love and appreciation for sacred choral music from mum, and Edward Woodward as well as Roger Whittiker. Opera came from my dad. La Traviata was my all-time favourite, and I would spend many a solitary Saturday afternoon dying of consumption in the lounge room, singing Violetta by heart and dreaming that my Alfredo would one day steal my heart and soul. The other great influence on my musical tastes was my elder sister. She was into Pink Floyd and Alice Cooper, so I was often lulled to sleep by School’s Out, Echoes and Shine On You Crazy Diamond. I remember losing it one time after hearing Dogs at the age of seven – all I could think of was those poor dogs barking as they drowned. It still haunts me. I think that is why I have such a broken heart for dogs in general. Its deeper and more emotional than I can relate in words. My heart still lurches when I listen to that track.
I was also subject to some Beatles – I used to put on our one record and play the drumkit to it. I Wanna Hold Your Hand and the most beautiful song of all, If I Fell. Oh the chord changes and the harmonies!! I was into the aural beauty of music from a very young age. My teenage years occurred during the electronically experimental and melodious 80’s. I was never really into bands comprised of guitar, bass and drums. I preferred electronica and orchestras that explored emotional depth through soundscapes. I still find it really hard to listen to any music that doesn’t come attached with an emotional memory. It is just noise to me. I guess for me, music is a multi-sensory experience, not just something to get my toe tapping. Having said that, I really love some Rammstein and Dio now and then – once or twice every six months or so……
So, when I woke up on my first morning back in Blantyre, to the “nails-down-a-blackboard” rendition of some screeching Asian voice accompanied by tenor saxophone in what I can only describe as a “suicide-inducing” song, ON REPEAT, I sat myself down, made a cup of tea and welcomed myself back to Malawi. I tried to drown out the horror with track one of War of the Worlds, but it didn’t gel with the screeching from next door. On about the tenth repeat of “the call to razors”, I politely asked my neighbour to turn the volume down and play another song. A potential session of anxiety-induced rocking back and forth had been averted.
For now.

Today the 27 students from Mbwadzulu PS received their uniforms, shoes, books and stationary.

It was pretty awesome. A huge thank you to all who donated to our Keep Girls in School project.

AUD$25 will educate a child for one year.

Thanks to the generosity of Penhros College, Como and Soroptimist International South Perth, 20 young girls have been given the opportunity to remain in school for the next year. They are some of the most vulnerable children at Mbwadzulu Primary School who would not normally be able to afford the small amount needed to remain at school.

Girls in Malawi have a very high drop out rate due to many cultural reasons and really need your help to receive a decent education. $20 will keep one girl in school for the year.

Malawi is in a state of famine at the moment and there is widespread hunger. If you can spare the cost of one meal, you can help a girl for one year.

This photo shows some of the sponsored girls, with Fosco Madzedze (Head of the PTA – and also my adopted father here in Malawi). 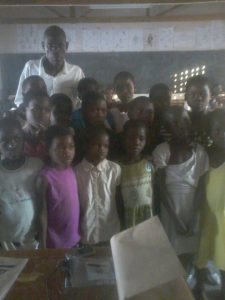 The new school year has begun in Malawi. Your generous donations to help keep girls in school have helped four Grade 8 girls pass their exams. These girls have been awarded a place in a state-run secondary school, which is only awarded to those who achieve the top marks, along with a scholarship paying half their school fees. Well done ladies!

Of the 27 girls sponsored from Mbwadzulu Primary School, 16 passed their exams so will continue to be part of our sponsorship programme. Here they are receiving books and pens as a reward. We need your help to continue their education. If you would like to donate up to $25, we can keep these girls in school. 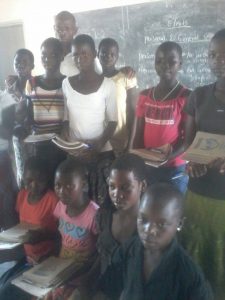 Help me make a difference to the lives of young girls in Malawi and donate today using PayPal.Me